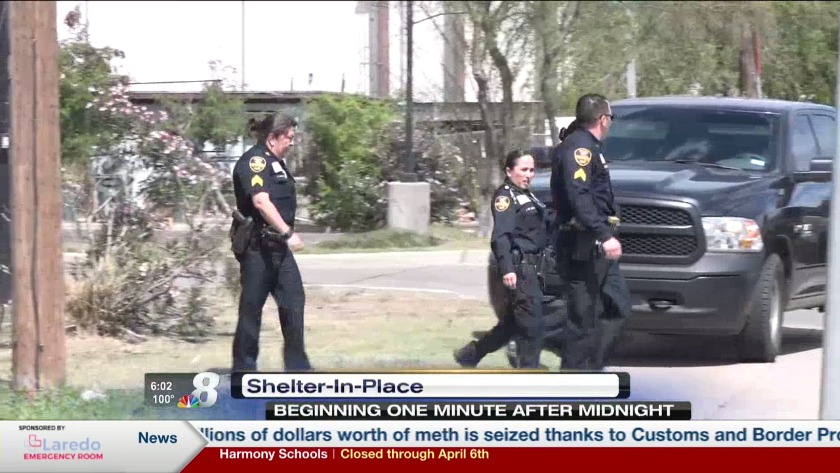 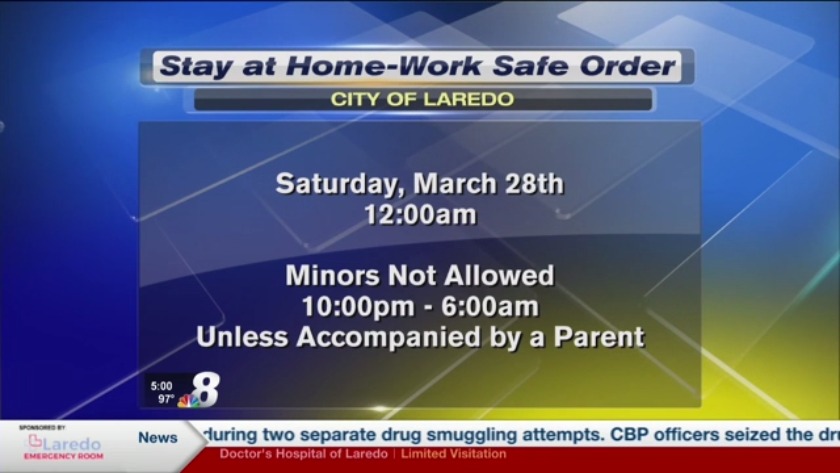 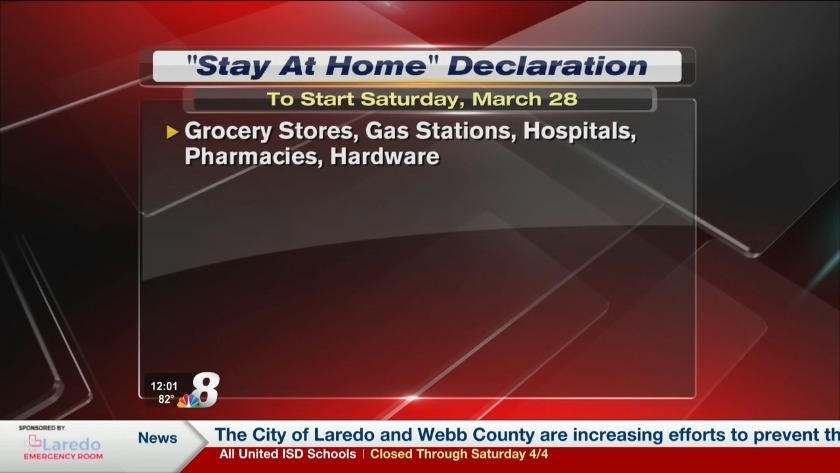 LAREDO, TX (KGNS) - The City of Laredo is taking extra pre-cautions to combat COVID-19 and Friday, one minute after midnight, the City is placing a Shelter-in-Place ordinance that will bring some new revisions to the restrictions already in place.

The Shelter-in-Place is not a lockdown, the City of Laredo is asking citizens to take immediate shelter where you are and remain within that facility or structure to provide protection.

It is not a lockdown in the sense that you are permitted to leave your home under certain conditions, and they're asking people to only implement essential travel.

Evidently, people have not been as cooperative as anticipated.

Interference from local law enforcement can be expected if you are not in compliance.

An additional number of officers can be expected out on the streets searching for groups engaged in gatherings that exceed ten people.

This does not apply to grocery stores, pharmacies, or even gun shops. It does apply to gyms, bars, lounges, maquinitas, bingo parlors and movie theaters.

Police will be issuing citations to people who are breaking the ordinance with fines not exceeding a thousand dollars and jail time not exceeding 180 days.

The Shelter-in-Place ordinance is now also targeting juveniles under the age of seventeen years.

While the City already has a curfew in place for minors, the hours have now been extended between 10 in the evening until 6 in the morning.

"We have been receiving calls and responding to these calls, but most importantly, the numbers show we're being very proactive ourselves," said Chief Claudio Trevino. "Our officers are investigating things.... They go out, they're proactively looking at the order and making sure the people are following the guidelines."

Two other significant changes will be that local retail stores that have remained in operation can only offer online and curbside services. This does not include grocery stores, however, gas stations can only allow ten people inside at a time.

Those who travel are not under scrutiny unless they've traveled to one of the hot zones like New York or Louisiana.

"I know that it may seem complicated, but it's important we pay close attention to the details," said Mayor Pete Saenz. "So, the message is again, stay at home and the only we can stop it is if everyone does their part to stop the spread."

As of now, the Shelter-in-Place ordinance will remain in effect until April 2nd.

Officials with the CDC have also changed some of the conditions they've considered for treating victims infected with the COVID-19.

City and county officials will meet prior to April 2nd to determine if they need to extend or alter the Shelter-in-Place ordinance.

They're planning to meet March 31st.

To read the city’s full statement, you can click here

DPS office opens their doors to the public
Related Documents